Does life imitate art, or is it the other way around? That's the question posed in Brendan Gall's new play, Wide Awake Hearts. Presented by Tarragon Theatre, the play is about a talented director who decides to cast his wife and his best friend as lovers in a film. The on-screen romance bleeds into the real world, however, and the filmmaker must discern whether the movie caused the relationship to form, or if it just brought the truth to light.
After the fairly clear set-up, Wide Awake Hearts devolves into a succession of monologues and scenes that are characterized by sudden shifts in direction and behaviour. Most of the sex scenes end up in violence, while verbal exchanges demonstrate the mix of love and hate the characters feel for each other: “I hope you die alone. I don't say that from anger. I really mean it”. 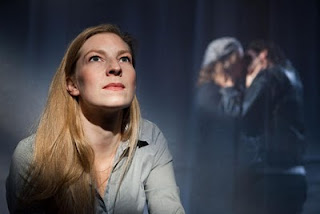 Maev Beaty in "Wide Awake Hearts"
Gall purposefully blurs the worlds between the on-set and off-set worlds of the play. “Stop talking in punchlines!”, says one character; “Stop giving me set-ups,” replies another. Similarly, the use of letters instead of names is some sort of acknowledgment that the characters are interchangeable, even though at times, the script leads us to feel for them.
Director Gina Wilkinson crafts a thrilling production, where each scene falls smoothly into the next and the public seems to be kept in the momentum, not missing a word. The tiny Tarragon Theatre's Extra Space doesn’t seem to challenge Wilkinson who plays with the space's limitations as if they were created specifically for this show.
“All the world's a soundstage,” says one of the characters, “and all the men and women merely day players”. A clever invitation to reflect upon a story full of sound and fury, signifying nothing and everything...
Posted by brèves fictions at 11/28/2010 Aucun commentaire:
Envoyer par e-mailBlogThis!Partager sur TwitterPartager sur FacebookPartager sur Pinterest

the year of magical thinking

“In an instant, life as she knows it ends”. These words are striking. They are omens of danger.
The opening of the play The Year of Magical Thinking by American playwright Joan Didion at the Tarragon Theatre in Toronto resonates with the power of a true story. The play is adapted from Didion's memoir of the same name and recounts the year she suddenly lost both her husband and only child. Despite the sad sensitive subject matter, the piece is an unsentimental clear-eyed exploration of grief and the unexpected feelings a once rational person might have to cope with to face it.
** watch a scene of the play
This moving story reminds us that the roots of theatre are in storytelling. The single character is beautifully played by Seana McKenna. The power of shared experiences creates a special bond with the audience that is addressed directly at different times during the play. Through the incredible specificity of the events in the narrative, Didion manages to reveal universality. 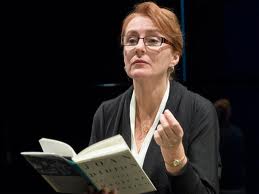 Seana McKenna
You might think you’ll be seeing it straight but you won’t.
A couple arrive home to their apartment on Upper East Side of Manhattan. The day has been difficult. They decide to eat in that evening.
It was at the table, making a salad. He was sitting across from me, talking. Either he was talking about … World  War One… or he was talking about the scotch, I have no idea which.
Then he wasn’t. Wasn’t talking.
In an instant, life as she knows it no longer exists. Her husband is rushed to the hospital; earlier, they visited their only child in intensive care. From now on, she struggles to imagine how she will care for them both: husband and daughter.
When she returns home and colleagues and friends begin to call, she makes a secret decision that will transform the next year of her life :
Let me make myself clear. Of course I knew he was dead… Yet I was in no way prepared to accept this news as final.
That was why I needed to be alone.
I needed to be alone so that he could come back.
That was the beginning of my year of magical thinking.


The lights turn off at the end of the play and we are left dreaming about magic and its role in mourning and loss. For a while, magical thinking is the keyword. It could be a rescue from the normal laws of cause and effect; an alternative to reasonable scientific thinking. As such, magical thinking allows us to believe that human beings can observe and be present to overwhelming inexplicable situations.

After all, the play bears out the message that magic is intrinsically subjective: sometimes apparently successful and supportive, sometimes a failure, but always a metaphor of the unexpected; a sign of what lies beyond…
Posted by brèves fictions at 11/21/2010 Aucun commentaire:
Envoyer par e-mailBlogThis!Partager sur TwitterPartager sur FacebookPartager sur Pinterest 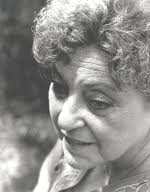 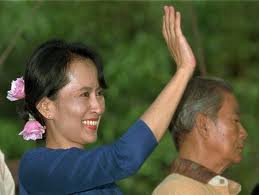